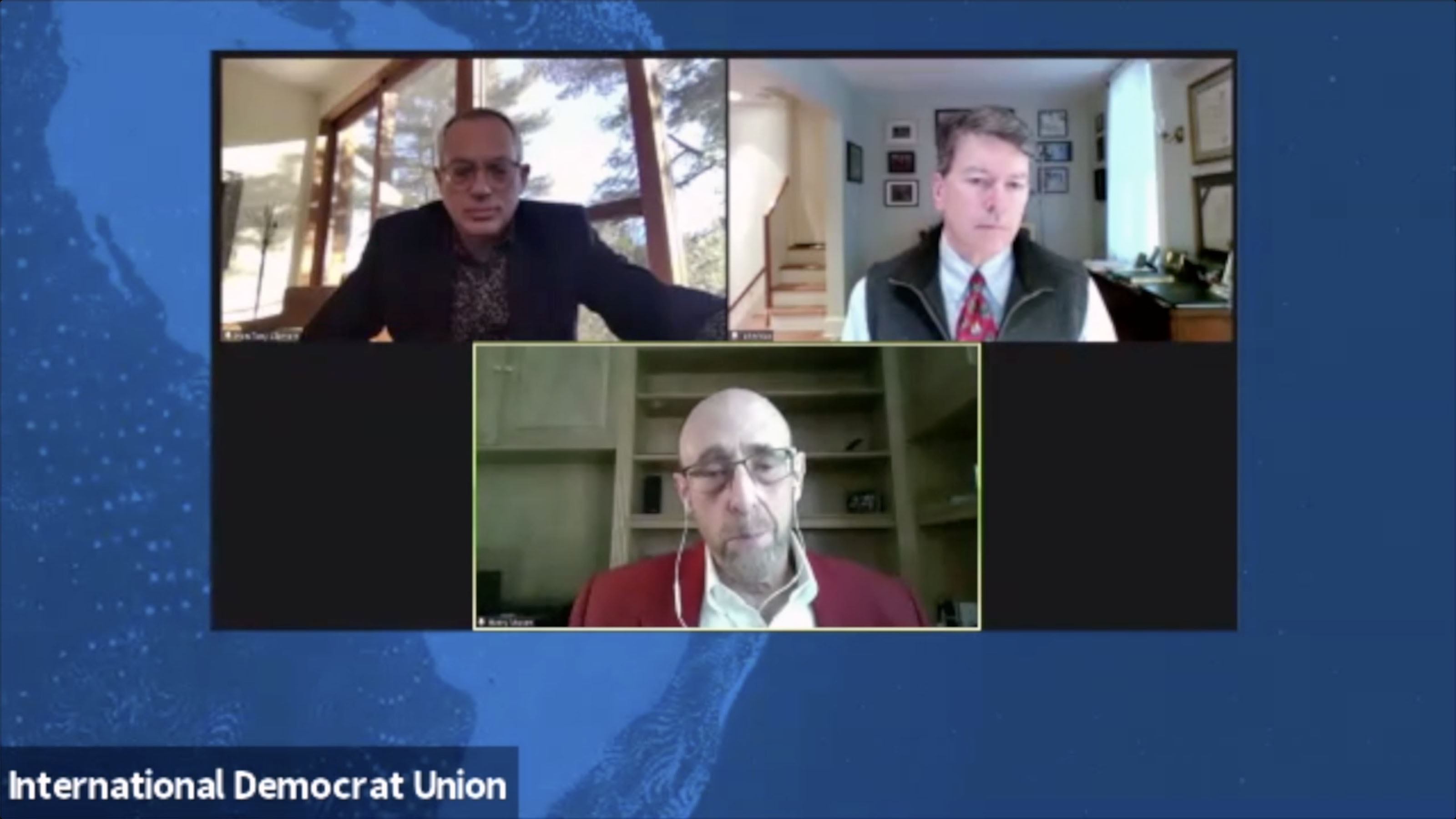 ‍Stephen Harper: Reshoring: Building the global supply chain of tomorrow with Harry Moser and Congressman John Faso. And they will be hosted by someone you know very well. Our longtime former deputy chairman, the Honourable Tony Clement. Tony, I turn further introductions and the rest of the proceedings over to you.

I want to do as by way of introduction a little bit of a set setting of the table. And that would start pre-pandemic, because even before the pandemic, the increasingly aggressive activity of China and the CCP, including the Belt and Road initiative, was giving rise to concerns about the global supply chain. Once COVID hit, we had a mad scramble for PPE and the belated realization about the supply chain's connection to public health and to national security.

What's more in areas like critical minerals, China's 70% chokehold on supply has implications for green energy, national defence, and much more. So it is time to build a global supply chain of tomorrow. Joining me to discuss this topic are two American experts. We have John Faso. He is a former Republican Congressman for New York's 19th congressional district, and is now a senior adviser to Wellington Dupont Public Affairs.

And we also have Harry Moser, who served for 25 years at the helm of AgieCharmilles, which is a machine manufacturing company. And then Harry subsequently founded the Reshoring Initiative to help bring manufacturing jobs back to the U.S.A. Gentlemen, thanks for joining us today.

Tony Clement: Harry, I want to go to first and maybe to give our audience who may not be familiar with the term reshoring. Can you describe reshoring for us?

Harry Moser: Reshoring is producing or sourcing in the country product that previously was sourced offshore, replacing imports with domestically manufactured products. Much of the decision is made by the OEM by the big company. But most of the production is often done by the SMEs, the small to medium sized companies theMittelstand equivalent of the German Mittelstand.

In general, workers reshore for the purpose of supplying the domestic market, and maybe neighbouring countries, exporting of the reshored products might happen, but that's not the generally the intent. Most broadly, reshoring means meeting domestic market demand by a local production instead of offshore production. So the domestically produced product could be produced in-house in the factory of the branded product company, or it could be outsourced to that SME.

It could be a next generation product that was never made offshore. So it doesn't have to be the same thing brought back. It could even be a domestic factory, taking share previously filled by imports by another company, domestic or foreign. So it's really a market consideration rather than a company consideration per se.

Tony Clement: Before we go to John, maybe just give us a sense of how this idea came about to Harry and how strong the trend is right now.

Harry Moser: There has been reshoring and offshoring, the opposite trend, going on forever essentially. Alexander Hamilton was famous for insisting that the U.S. develop its manufacturing capability and become self sufficient. So he was reshoring at that time. In the U.S. from say 1980 to 2015, there was a huge growth in offshoring. And as a result, we wound up with a consistent $800 billion per year goods trade deficit.

Reshoring started going faster around 2010. We had got back about 6,000 manufacturing jobs in the year 2010. And that grew to 190,000 just in the year 2017, driven significantly by President Trump's reductions in corporate taxes and regulations, generally a more business friendly environment. And then it fell off unfortunately in 2018 and 2019. Influenced by the trade wars, which created business uncertainties, companies didn't know when the tariffs were going to end. Therefore, they stopped and said we'll wait and see how that plays plays out.

The reshoring now has picked up in 2020, driven significantly by COVID. About 66% of the cases since March 2020 have mentioned COVID as one of the driving factors in causing them to reshore. There are also significant reshoring efforts underway in the UK, they have an office and quite a good group doing that. And I believe Australia has done some work on this. And we get periodic contacts from countries around the world or wanting to know how to reshore, how can we do it. And we're happy to help.

Tony Clement: John Faso, from your vantage in the US Congress before and now in business. What's your what's your sense of the shoring in this context today?

John Faso: Well, I think picking up on what Harry just said. And first thank you to the IDU for this great opportunity to come before you today. What Harry just said in terms of COVID, it has reawakened it has awakened a desire of many Americans to recognize that we are critically dependent upon China and other nations around the world for supplies of important minerals and critical medical equipment, etc.

And this has really come to roost really in the COVID crisis when you had multiple U.S. states, all competing with each other to secure personal protective equipment, facemasks, gowns, etc, gloves, that simply adequate domestic supplies could not be found.

And it is really now awakened Americans, and I think Congress on a bipartisan basis, to look at the critical dependence that we have on China and other actors around the world, for active pharmaceutical ingredients, for instance, which are critical to the manufacturer of generic drugs, which you know, vast numbers of American consumers receive and take generic drugs every day. We are very dependent upon China and places like India, for those pharmaceutical products. It's kind of shocking when you think the last American pharmaceutical company domestically that produced penicillin closed in 2004.

And so many Americans now are becoming cognizant of our dependence upon China, and it's an unhealthy dependence upon China. We saw back in 2010, when China had a dispute on an unrelated dispute with Japan, and they cut off supplies of critical minerals. And so we've seen the willingness of China and the Chinese Communist Party to use this leverage that they have obtained over the last 10 to 15 years, and to use it to try to bring about and effectuate their political agenda, their defence agenda, their economic agenda. They have a very mercantilist approach to international trade. It's not a beneficence trading partner.

And I think that one of the things that has really benefited the United States, for instance, has been the advent of hydraulic fracturing, which has developed tremendous natural gas resources. The United States is now the largest producer of oil and natural gas in the world. We're now exporting natural gas and petroleum products and that in large part has made the United States because we are a low cost energy producer. It also helped us in terms of this reassuring argument because it has brought some manufacturing back to the United States that previously was going abroad.

But it's going to be this is not something that's solved automatically overnight. It's not a magic wand type of situation. It's going to require a concerted effort on the part of a government and industry,

This afternoon, the Honourable Chrystia Freeland, Canada’s Minister of Finance, delivered the 2022 Budget in the House of Commons.